The property and casualty guaranty funds know better than anyone that the increased insolvency activity that occurred starting in the late 1990s resulted in a record payout for the guaranty funds. The vast majority of this work for the guaranty funds arose from the insolvency of insurers that wrote primarily commercial lines business such as workers’ compensation, liability and commercial auto. An analysis of the data for this recent period provides a good opportunity to address some lingering questions concerning the property and casualty guaranty funds, and the extent of coverage they provide on these commercial lines claims.

This paper explores and explains some rather surprising conclusions suggested by a review of this data: first, the recent high level of claims activity further establishes that the guaranty funds, in fact, do provide extensive coverage on commercial lines claims, second, guaranty fund claims comprise the vast majority of policyholder class claims even in insolvencies involving commercial lines carriers, and finally the recent high payout indicates that a significant portion of related costs may be borne by personal lines insureds.

The latest batch of insolvencies caused the busiest period ever for the guaranty funds. This recent period was somewhat unique in that the vast majority of the payout was driven by a small number of large commercial insurers that for the most part wrote workers’ compensation insurance. Exhibit A lists the 10 largest 2000-05 insolvencies along with their respective payouts. (While only 10 insolvencies in total are listed here, a number of these insolvencies actually involved groups of affiliated insurers. The 10 items listed here actually involved the insolvencies of almost two dozen individual insurers.) Seven of these insolvencies wrote workers’ compensation as a major or exclusive line of business. Two wrote personal lines in Florida, and one wrote medical malpractice coverage. 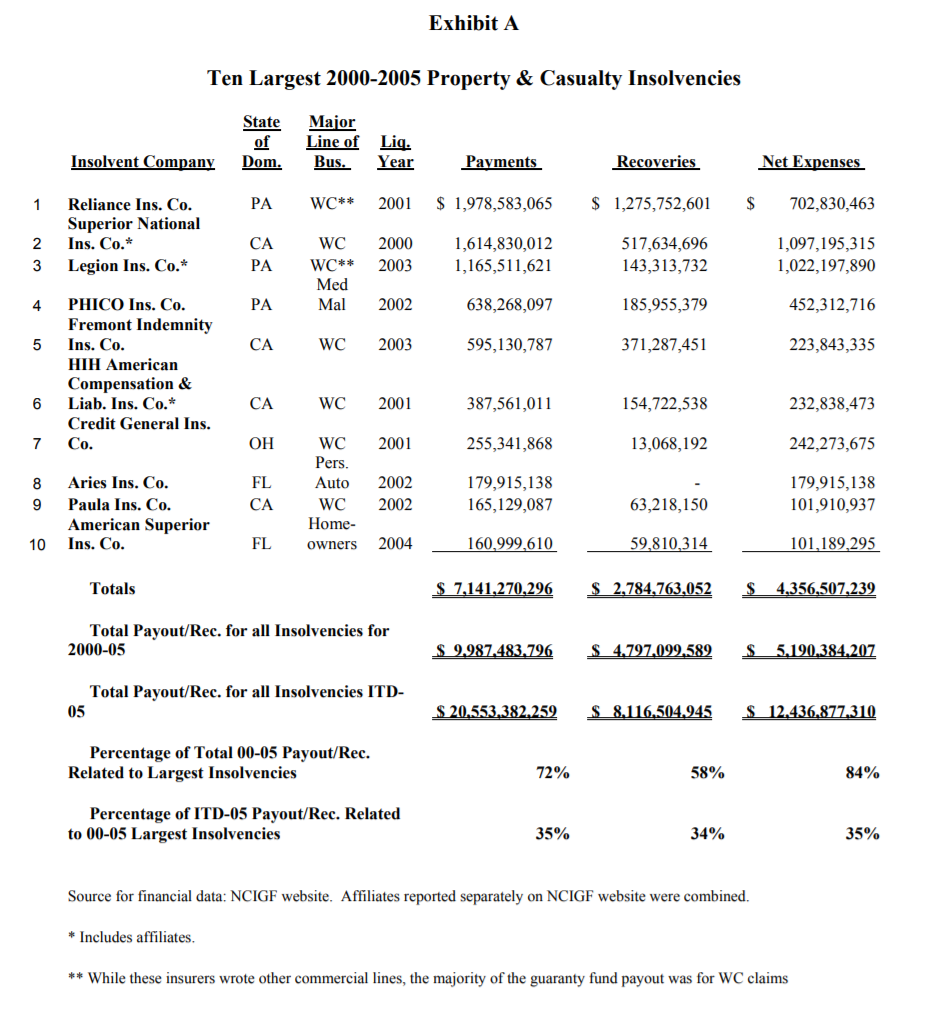 Things got rolling with the insolvency of the Superior National companies in 2000. A total of five different workers’ compensation insurers were a part of this group, for which most of the responsibility came to rest with the California Insurance Guarantee Association. Reliance Insurance Company, the largest property and casualty insolvency to date, followed in 2001. The total payout to date through 2005 for these 10 insolvencies represents 84 percent of the total net payout that occurred during this period, and already comprises 35 percent of the total net payout on an inception-to-date basis. If payout for the personal lines insolvencies is excluded, the remaining eight commercial lines insurers still accounted for 79 percent of the total net payout for 2000-05. What is somewhat surprising is that these recent insolvencies already by themselves comprise a significant component of guaranty fund payout even though the data represents only the first few years of activity.

This recent period in which commercial lines claims dominated payout provides some interesting and rather surprising new information concerning the guaranty funds’ extent of coverage and level of protection provided to commercial insureds.

The data developed in connection with the review indicates heavy payout on commercial lines claims. The study reported that guaranty funds paid in total for 2001-04 claims of $6.1 billion and LAE of $1.1 billion, for a total of $7.2 billion. A total of $6.8 billion, or 94 percent of the total payout was on claims involving commercial lines. Two thirds of total payments related to workers’ compensation claims.

The latter is significant if for no other reason because it indicates a very significant flow of policy benefits to commercial insureds. This is true despite the fact that the guaranty fund laws of well over a majority of the states (in number) limit coverage of commercial lines claims through some combination of provisions that establish independent filing deadlines for claims (“bar dates”) or limitations based upon the net worth of the insured.

Admittedly, one challenge that almost always exists in analyzing insolvency data is that we only have part of the picture. We have data on the claims the guaranty funds actually cover, but we don’t really know much about claims they don’t cover. Not surprisingly, guaranty funds do not maintain data on claims they don’t pay. Most receivers, while responsible for evaluating all policyholder claims, don’t publish any such data. Many receivers would likely say that they don’t know the extent of non-covered claims because claims have not adequately developed. The obvious question is: how can we actually know how much guaranty funds actually cover if we don’t have any data on what they don’t cover? This practical difficulty has in the past usually frustrated any kind of meaningful analysis in this area.

hings may be changing. The Reliance liquidation, discussed below, may prove to be an important exception to the above rule.

Does a 6 percent payout on personal lines mean something is wrong? Probably not. Statutory limitations that require all other applicable coverage by solvent insurers to first be exhausted likely significantly reduced guaranty fund payout on at least personal auto claims. Further, the nature of the business written by insolvent insurers themselves would tend to result in relatively low payout on personal lines claims.

There may be some good reasons for the significant differences in guaranty fund and industry claims profiles when viewed in the aggregate that would make it difficult to draw any conclusions from the above. Although Reliance, Aries and American Superior each presented personal lines exposure, these insolvencies together with the others probably don’t present a mix of business that is representative of the industry’s mix when taken as a whole, so overall comparisons may have limited value.

However, Reliance when viewed on its own does provide some interesting information concerning the guaranty funds’ coverage of commercial lines claims.

The liquidator of the Reliance estate has done a very commendable job of publishing financial data that in many respects is quite extensive. Quarterly financial reports are filed with the receivership court, and can be found at www.reliancedocuments.com. This, together with the availability of pre-liquidation loss reserves for Reliance, permits a new kind of analysis to be done with respect to the extent to which policyholder claims are covered by guaranty funds.

The last year in which Reliance filed annual statements was 1999. The annual statement data for that year indicated that on a consolidated basis, total loss reserves including IBNR on direct business gross of reinsurance and excluding surplus lines totaled $4.7 billion. This amount represents the closest proxy for overall guaranty fund exposure that can be found in an annual statement.

According to the Reliance liquidator’s most recent status report, the guaranty funds in total have paid out through June 30, 2007 a total of $2.4 billion in losses and LAE, with $1.8 billion in Loss/LAE reserves for total of $4.2 B in paid/incurred. The liquidator so far has allowed $391 million in other (non-covered) policyholder level claims. This means that in terms of pre-liquidation reserves, guaranty fund paid claims and reserves comprise 89 percent of the total. When guaranty fund paid/incurred is combined with non-covered claims so far allowed by the liquidator, the resulting total of $4.6 billion comes surprisingly close to total pre-liquidation reserves. This tends to indicate that guaranty funds have paid or will pay an amount equating to roughly 90 percent of the company’s pre-liquidation reserves for its entire book of direct, admitted business. This provides some support to indicate that guaranty funds are covering the vast majority of policyholder claims.

Granted, there are limitations in this comparison. Troubled companies are notoriously under-reserved, and Reliance was probably no exception. Further, the comparison does not consider that bar dates vary from jurisdiction to jurisdiction. Some guaranty associations are required to continue to honor certain new claims that may be reported. Therefore, guaranty fund incurred claims will continue to grow. However, and conveniently, each of these factors would tend to cancel the other out.

While the above could not be considered a definitive analysis, it does shed some light on the extent of coverage actually provided by the guaranty funds for all admitted business of a commercial lines insurer. It would be interesting to expand the analysis to some of the other insolvencies, to the extent such data could be made available, to see if they provide the same result. Significantly, the above comparison uses a very simple, objective approach and hard data from at least the post-liquidation side.

It is important to note that the three largest states in terms of gross guaranty fund payout, California, New York and Florida, do not have one or both of a net worth or bar date provision. The three states together made 62 percent of the total 2000- 05 net guaranty fund payments nationwide. While it may be likely that this alone had a significant impact on the overall extent to which guaranty funds covered policyholder claims, it would not change the bottom-line result that significant coverage, in fact, existed.

Despite various statutory limitations on coverage, it appears that, based upon recent data, guaranty funds are providing quite extensive coverage on commercial lines claims. Yet the guaranty funds’ statutorily prescribed method of passing on costs for paying these claims places a heavy burden on personal lines insureds.

It may be worthwhile to consider a more in-depth study concerning the extent of the guaranty funds’ coverage of commercial claims. If receivers from some of the recent large insolvencies would be able to provide the same kind of data that the Reliance liquidator has seen fit to regularly make public, it would enable us to develop a broader-based analysis. If in fact guaranty funds are paying most commercial lines claims, as the above tends to suggest, this is a matter that should be communicated to policymakers and other interested parties.