When an insurance company goes into liquidation, money, claims and the need to sort out the insolvency take center stage. But the focus of guaranty associations is the fact that behind every claim is a person – often a person in need. 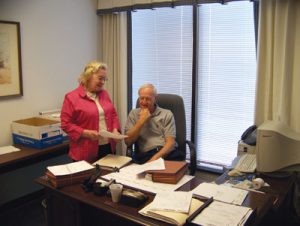 PICTURED: Claims Examiner Becky Muskovin and Claims Supervisor Warren Bullard of the South Carolina Property and Casualty Insurance Guaranty Association are managing Hal’s claim. They have been in the claims business for more than 40 years.

Like all guaranty fund claims managers, Bill Morrison of the South Carolina Property and Casualty Insurance Guaranty Association focuses on the “dollars-and-cents” of insolvency administration. After all, it’s his job to see that claims are paid. But Morrison’s command of the numbers and the intricacies of insurance insolvency law doesn’t prevent him from demonstrating the essential life-enhancing benefits his association – and the guaranty funds system overall – brings to the claimants it serves. He calls it “putting a face” on the claim. One such “face” is Hal (not his real name), a 24-year-old man who sustained extensive electrical burns in 2000, a catastrophic on-the-job injury that required amputation of his legs, pelvis and an arm. Hal was covered under a workers’ compensation policy written by Legion Insurance Company. When Legion was placed into liquidation in 2003, the South Carolina Property and Casualty Insurance Guaranty Association stepped in to pay its outstanding claims. Since receiving Hal’s workers’ compensation claim from Legion, the association has seen to it that the guaranty fund system has done more than just cut checks. “We’ve had a handicapped-equipped house built for him,” says Morrison. “This includes lift devices and overhead tracks on the ceiling to move him from one part of the house to the other. We’ve also provided him with a handicapped-equipped van, and we’re paying his sister – his primary care giver – a monthly stipend to provide for his care. This was all deemed to be much better than having him in a nursing home.” The guaranty fund also is paying for extensive ongoing medical treatment for Hal, including specially designed wheelchairs and beds and an artificial arm that will cost more than $50,000. “It’s a claim that necessitates almost daily contact with some aspect of the case,” Morrison says. A co-worker of Hal’s who attempted to rescue him was also severely burned in the incident. The South Carolina association is also managing that claim. Morrison says putting a face to claims administered through his office has been a good way to show the community the good work they – and guaranty fund systems ? do. “There are claimants all over the country who are being cared for because of the guaranty system,” says Morrison. “The main issue is: if it were not for the guaranty system, this young man would be in an even more difficult situation.” So would many others.